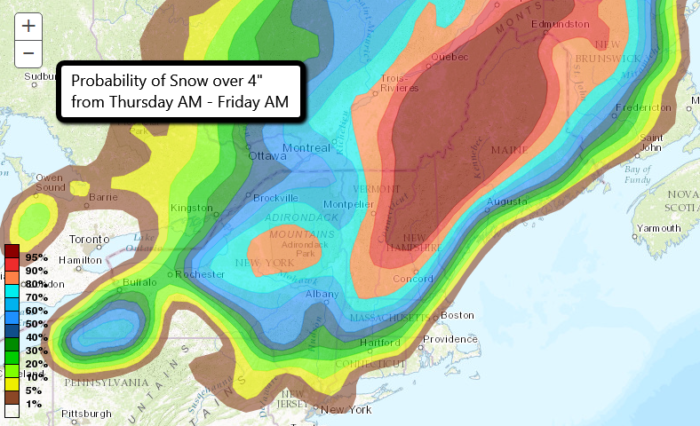 A strong coastal low is expected to develop tomorrow along the Mid Atlantic coast. It will then strengthen as it moves up the eastern seaboard through Friday. With cold air in place across much of New England, high snow totals are expected. The major Northeast cities: New York, Boston, and Philly, will have warm enough temperatures that mostly rain will fall.

Some light snow for Thu. Snow quickly changes to rain at the coast, with little if any accumulation. 1″- 3″ for inland areas. pic.twitter.com/9JoZ7e6U51

Inland areas of the Northeast, including parts of New Hampshire, Vermont, Maine, and Massachusetts will pick up the highest snowfall amounts. Some areas could get close to a foot! The highest elevations of the Appalachians might reach closer to 20″ or even 24″ of fresh snow. Winter Storm Warnings for these locations go in effect Thursday morning. Parts of Upstate New York will be under a Winter Weather Advisory Thursday for anywhere from 2-8″ of snow.

[330pm] Here are the updated possible snowfall totals for tomorrow. We are expecting a warmer system to yield less snow for the North Shore. pic.twitter.com/4kvt2m13DW

As the low climbs up the East Coast, winds will pick up and could gust as high as 30 mph in some places especially on Thursday night. Heavy snow paired with gusty winds could cause limited visibility and hazardous driving in areas.

The forecast snow totals could change based on the track of the coastal low. If it tracks a bit further east, some coastal cities could get measurable snow. Stay tuned to local forecasts and follow us on Twitter for the latest!