A big change in the pattern will bring colder temperatures, strong winds, and potentially the first snow of the season to parts of the Northern Plains and Upper Midwest. Uncertainty remains in the the track of this low pressure system, so it’s still too soon to talk potential snow totals.

Starting later today, flakes will begin to fall in the higher elevations in the West. As the snow spreads eastward into the Northern Plains, the winds will pick up which could create travel headaches with blowing snow and limited visibility. The eastern Dakotas, Minnesota, and northern Wisconsin will begin to feel the effects of this storm system late Thursday and throughout the day Friday. 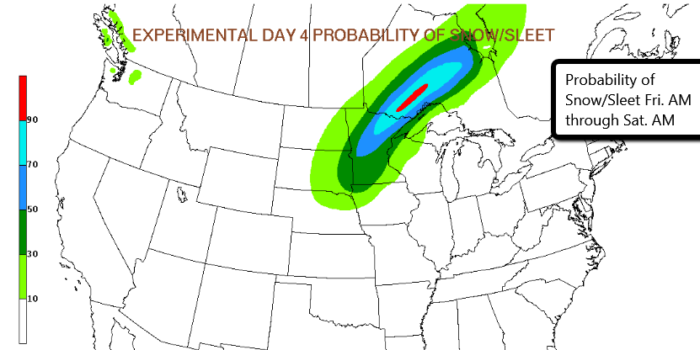 From Sioux Falls, SD to Fargo, ND and International Falls, MN, accumulating snow is looking likely. The Twin Cities will see some snowflakes, but it’s too early to determine if any of that snow will stick.

Looking more likely that a potential winter storm could bring snow and strong winds to the region late this week! pic.twitter.com/IYmDiUnntv

This is a potent winter storm and will bring snow, wind, and much colder temperatures to the Northern Plains and the Upper Midwest. For many, it will be the first real taste of winter this year, so make sure your home and vehicle are prepped and ready.

Pay close attention to the forecast because things could change! For the latest, follow us on Twitter.