Potentially historic flooding is occurring in extreme northeastern Iowa after many locations picked up between 6″ and 8″ of rain overnight.

A Flash Flood Warning remains in effect until 12:45 PM for parts of Chickasaw, Howard, Allamakee, and Winneshiek counties.

There are reports of many submerged and even a few washed out roadways across the area. The National Weather Service in LaCrosse, WI is also warning of the potential for mud slides near steep terrain. 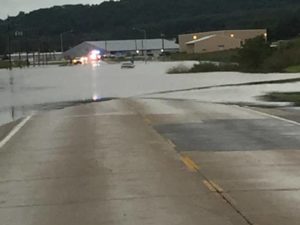 Many rivers and streams are at flood stage with record flood crests possible in several locations. The Turkey river at Spillville has already surpassed its previous record of 19.0′.

According to the Winneshiek County Sheriff’s office, Spillville is one of the hardest hit areas and Freeport, a nearby community, has reportedly been evacuated. An emergency shelter has been opened at Stone Ridge Community Church in Decorah.